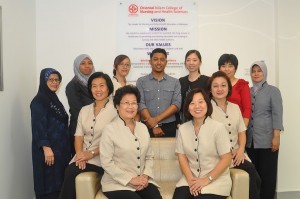 Oriental Nilam College of Nursing and Health Sciences was established out of realization that nurses are in demand not only in the country but globally. The College received its approval as a Private Institution of higher learning from the Ministry of Higher Education Malaysia on 8 February 2006 and currently has full accreditation status from Malaysian Qualifications Agency (MQA). First programme offered by the College was the Diploma in Nursing and the first enrolment of student nurses was in July 2006, followed by twice yearly enrolment. In total twenty batches of student nurses have graduated with a 100% passing rate in the Malaysian Nursing Board Examination with many of the graduates scoring a distinction grade as per 2019. The College received an Excellence College Award commemorated by Malaysian Nursing Board, Ministry of Health Malaysia with one of her graduate receiving the Silver Medalist Award in year 2012.

In line with the expansion plan of having a hospital and a college building at the medical hub project in Malacca, the strategic plan of the College is to open up more programmes to meet the Vision of the College as well as Vision 2020 of the Country. Having the hospital and nursing college under one umbrella certainly enhances teaching and learning of students in which practical training in related disciplines formed a major part of the curriculum of nursing and allied health sciences programme. We train and equip nurses with knowledge and skills to enable them to function effectively, efficiently and professionally in fulfilling the ever changing health needs of the country as well as globally.

× Whatsapp us for more information.